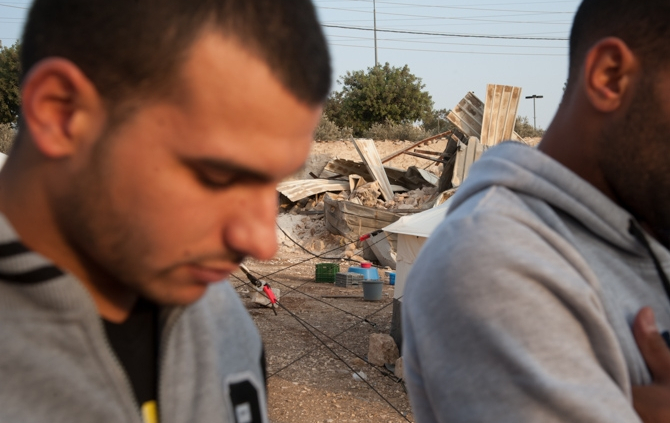 On Monday October 28, at 5:00 a.m., Israeli forces entered the house, ordering the family to immediately leave the building because a demolition order had been issued.

The Abu Tarbush family home was located on the “Jerusalem side” of the Israeli separation wall on the land owned by the Latin Patriarchate (Roman Catholic Church) near Checkpoint 300 – the main Israeli checkpoint controlling movement between Jerusalem and Bethlehem. Today only rubble and debris remain.

On Monday October 28, at 5:00 a.m., Israeli forces entered the house, ordering the family to immediately leave the building because a demolition order had been issued. Bulldozers of the Jerusalem Municipality were waiting outside. The family managed to rescue some of their furniture before the bulldozer buried everything else under the wreckage. Fourteen people, including a significant number of minors, suddenly found themselves in the open without shelter. The women and the younger children temporarily moved to Bethlehem to some relatives while the men and the youngsters built and prepared two tents which the Red Crescent had provided for them. Once the tents are prepared will be done, the women will come back, as the family is determined to remain on the land until a new house can be rebuilt.

This is the first time that Israeli forces have destroyed a house built on the land owned by a church. During a visit on the land after the demolition, Fouad Twal, the Latin Patriarch of Jerusalem, accompanied by the Vicar of Jerusalem Shomali and the Vicar for Israel Marcuzzo promised the family that the church will help them rebuild the house. In a press conference held at the site of the demolished home, the Patriarch defined the destruction as an “act of vandalism” and said:

Looking upon a painful and upsetting scene raises discontent and anger. There is no justification for the demolition, but when the municipality and the Israeli government enact demolitions and displace people from their homes, these practices increase hatred and endanger the future of peace.

[The] land has belonged to the Latin Patriarchate long before 1967. The Patriarchate possesses the official deed, and all legal paperwork proving ownership. Even worse, the legal tenants of the property, Mr. Salameh Abu Tarbush and his family, were taken by surprise by the demolition.

According to the Latin Patriarchate, the Jerusalem Court of Justice declared the house as illegal and issued the demolition order at the end of November 2011. Mazen Copti, the Patriarchate’s lawyer claims, however, that the decision does not abide by Israeli law, since the house dated back before the establishment of the State of Israel and was annexed in 1967, when the occupation began. The lawyer asserts that, according to the Israeli law, it is prohibited to demolish buildings older than five years.

A tour bus approaches the Israeli military checkpoint controlling access between Jerusalem and Bethlehem, just behind a wall concealing the remains of the Abu Tarbush family home, which was demolished by Israeli authorities. /photo: Ryan Rodrick Beiler

The Patriarchate intends to take legal action against the Jerusalem Municipality and the Israeli Ministry of the Interior.
“We are the rightful owners, and you will hear our voice before all governments worldwide, and we will take legal action in appropriate courts to rectify this injustice, to bring back justice and rebuild this home,” said Twal. The lawyer Mazen Copti confirmed that, “We will take all legal measures against the municipality of Jerusalem and the Israeli Ministry of the Interior to rebuild the house as it was.”

The alleged reason for the destruction was the strategic position of the house as it was situated between the settlements of Har Homa and Gilo and it could have therefore represented an obstacle to the construction of a street that would connect the two settlements.

UNOCHA reports that this year, Israeli forces have so far destroyed 91 houses in Jerusalem, rendering 265 people homeless. Last year, during the same period of time, 64 houses were demolished and 71 people displaced.