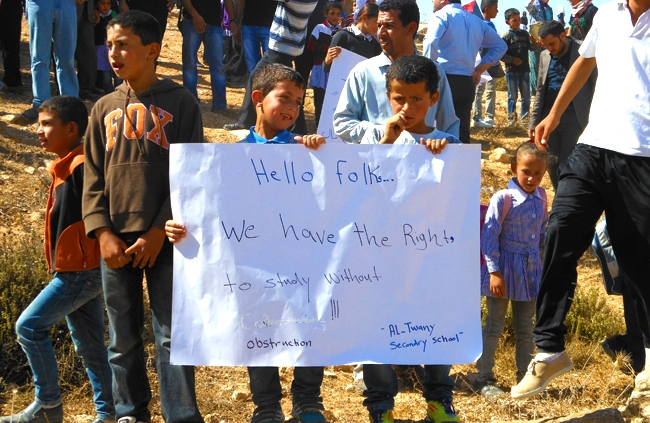 It is eleven o’clock in the morning when a large group of children pours from the school of At Tuwani and down the hill to the meeting point in front of the Operation Dove centre, where a number of international activists await their arrival.

It is eleven o’clock in the morning when a large group of children pours from the school of At Tuwani and down the hill to the meeting point in front of the Operation Dove centre, where a number of international activists await their arrival. The cheerful and colourful group of pupils, teachers, parents and some older boys, walk down the hill singing Palestinian songs and waving Palestinian flags. The children in the first row carry banners in English and Arabic that say: “Hey folks, we have the right to study without obstruction!”

The occasion of the gathering was a solidarity action organized this Wednesday, October 23, by the South Hebron Hills Popular Committee and The Freedom Theatre’s Freedom Bus, to assert the right to education of children from Tuba and Maghayir Al Abeed. The action consisted of a short march in the areas where the local children meet the Israeli military escort that accompanies them home for their safety – the route back to their villages winds between the settlement of Ma’on and the ultra-orthodox outpost of Havat Ma’on, home to some of the most extreme and violent settlers in the West Bank.

During the march, a number of At Tuwani’s residents join the group, which heads for the so-called “gate” on Khelly Hill – the agreed point where the children wait for their military escort – where they find five soldiers blocking access to the “gate”. An army vehicle soon joins the soldiers, and on a nearby hill three soldiers are seen monitoring the situation from a distance. Over the next two hours more than 5 military vehicles and 3 armoured police cars arrive. This deployment of force is unwarranted, and gives the children the unwelcome, but not unfamiliar, feeling of being surrounded by malevolent forces.

Luckily, the Freedom Theatre crew are there to distract from the army’s presence and continue their performance. The troupe uses a method called ‘Playback Theatre’, an interactive approach where audience members share thoughts, feelings and fears that the actors then transform into improvised pieces. The performance is a resounding a success, and again the crowd begins singing Palestinian songs of liberty. Soldiers begin to approach the group, clearly with the intent to interrupt the activity, and the children shout slogans about their right to education in English. Army personnel inform the group that they must move, as the area has just been declared a “closed military zone”. Despite the lack of official documentation to back up this claim, the crowd decides to move a few meters away before Clowns Without Borders commence their performance.

The main goal of the action was to draw attention to the increasing negligence of soldiers in fulfilling their escort duties, and the consequences of this negligence on the children’s access to education. In November 2004, the Knesset’s Children Rights Committee established the military escort to protect the children from violent settler attacks. Recently however, it has become commonplace for the escort to arrive late – if it arrives at all – leaving the children exposed and unprotected for long periods in highly dangerous areas. As a result, the children are often late for school after being left with no choice but to walk longer routes (some over one hour in duration). Although accompanied by international activists, the routes are still dangerous, and the activists have no power or authority to prevent settler attacks or harassment.

Operation Dove – an Italian organization that has accompanied the children to school and monitored the military escort since 2004 – denounced the dangerous negligence of the army and the resultant damage to the children’s access to education. According to their School Patrol Report of September 2013, since the beginning of the current school year, soldiers failed to complete the escort route in 91% of cases, leaving the children alone in particularly high-risk areas. In October, the situation deteriorated further, with the escort failing to even arrive on three occasions. According to Operation Dove, in two of these three instances, the children faced harassment from settlers, including catcalls and threats of violence.

In the South Hebron Hills the right to education is not only endangered in At Tuwani, but also in the nearby village of Al-Fakheit. Al-Fakheit is one of eight villages in Firing Zone 918 currently facing the prospect of demolition. The school was inaugurated in September 2009 and, although affected by a marked lack of infrastructure and resources, plays a vital role in the community, schooling over 50 children from a number of surrounding villages. Indeed, since the school opened, and in spite of the continuous harassment from the army and the threat of demolition, the number of children finishing primary education has significantly increased in the region. Prior to the Al-Fakheit school, many children had to travel to At Tuwani or Yatta to study, which was simply not an affordable option for a number of families. 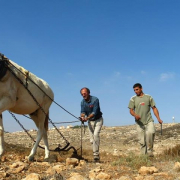